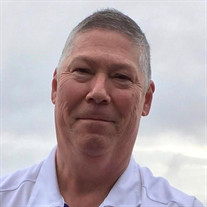 Bernard “Barney” Edmund Treacy of Moses Lake, passed away on August 25, 2020 in Quincy, Washington. Barney was born September 30, 1956 on Larson Air Force Base in Moses Lake, WA. Growing up Barney played sports with his twin brother Charles “Chickie” Treacy. They were big into tennis, volleyball and softball. Each brother was talented in their own right but they were a dynamic duo when they played together. The love of volleyball and softball continued for Barney well into his adulthood by playing in adult leagues and coaching his daughter. Barney was also known to play golf in his later years as this was “easier on his knees”. Barney graduated from Moses Lake High School and afterward served in the Army stateside and abroad in Germany. Barney served honorably and earned a Marksmanship badge while in service. Barney is survived by his two children- Lauren and William Treacy and loved spending time with them. He made trips to Seattle and East Wenatchee to visit them and was always on the hunt for the best food, pastries and coffee around. His culinary tastes extended into the kitchen where he was a budding chef trying all types of new recipes. Barney also enjoyed movies and documentaries and was an avid news watcher. He stayed up on current events and was eager to talk with others about what was going on in the world. Barney worked at various companies including Columbia Colstor and most recently Quincy Fresh Fruit. He had a work ethic unmatched by any, never asked anyone to do something he wouldn’t do himself, and brought joy and humor to his daily interactions. Barney was loved by all who worked with him and will be missed by his many coworkers over the years. Barney was an open-minded, kind and loyal person who truly cared for and connected with everyone. The ease with which he was able to connect with others and build authentic relationships is rarely seen. Barney was always there to support with whatever someone needed and did not expect thanks or praise. He was also known to share vivid stories of his Army life abroad, playing sports, or all the unique characters he had the experience of working with. Barney’s model of what it meant to be a good human will have a mark on everyone who knew him. On top of his survived children, Barney is also survived by his siblings: Jim, Betty, and Chickie Treacy. There will be a private service followed by an open public viewing on Tuesday, September 1 from 11am to 4:30pm at Kayser’s Chapel and Crematory. These extended hours are available to support everyone safely paying their respects during this time. Barney lived a full life, full of rich experiences that was cut too short. The family encourages all who were close and knew Barney Treacy to come at any point during viewing hours to: pay their respects, share memorable stories, and overall celebrate his wonderful life.

The family of Bernard "Barney" Edmund Treacy created this Life Tributes page to make it easy to share your memories.

Bernard “Barney” Edmund Treacy of Moses Lake, passed away on...