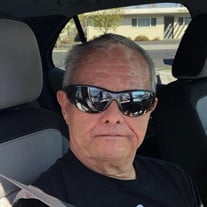 On December 23, 2020, Benito (baseball Benny) Zamora was embraced by his Heavenly Father and peacefully went home. Benny was born on April 8, 1958 in San Antonio, Texas, to Pedro Zamora and Belia (Montemayor) Zamora. At an infant age, Benny migrated from Crystal City, Texas (where his family lived) to Moses Lake where the family worked in the beet fields. Moses Lake became the family home in 1965 until now. Benny started attending Central School in his early school years. It was determined due to his Downs Syndrome, that school was not for Benny. He was more a labor worker, which thru the years he worked under the supervision of his dear friends Jennifer Baily and Alan Nelson (1st Choice). That took him to his final place of employment (volunteered) at the Moses Lake Food Bank. Children always brought smiles to his face! His hobbies were hanging out at the Larson softball fields. There he became known to all as a coach, score keeper and needless to say…….a traitor because he was known to always end up with the winning team. (lol) Other hobbies included dancing, singing, performing with HIS musical bands “Los Waylites” and “Zapata Band” (always my brother-in-law Robert Padron). Most of all, in his later years, it was football. His favorite team…….the SEAHAWKS!!!! His exact words were……”my team, mine”! And then again…..here comes the traitor in him, cause he would then go with GreenBay, San Francisco 49ers, to mention a few. To be honest his football years began with the Dallas Cowboys (his niece Berta didn’t let me forget that). Why he then chose the Seahawks as his #1 team, no one will ever know except Benny boy! Benny (and the Jets, as his niece Sofie would say), was preceded in death by his father, Pedro B. Zamora in 1992 and his mother, Belia M. Zamora in 1994. He initially was in the care of his loving cousin Minerva Nevarez, and shortly there after went to live with his sister Blanca E. Zamora until his last day. He is survived by his siblings, Cristina Santos (San Antonio, Tx), Blanca E. Zamora, Andres A. Zamora (both of Moses Lake), Jose (Pepe) Cervera from S. Milwaukee, Wi., Pedro (Jr.) and wife Gloria Zamora (Moses Lake), Livila Ruff (Moses Lake), and Juanita Archuleta (Salt Lake City). Benny had many nieces and nephew, and great and great-great nieces and nephews, too many to mention, but you all know who are. He loved each and everyone of them in his own way. A big thank you to each and everyone of his relatives and friends, especially thank you my cousin Rosalinda for caring for the months you would let me stay with you so that I spend time with my idols….Lalo, Moncho and Jimmy. My life would not have been complete with out you all in it!

The family of Benito Zamora created this Life Tributes page to make it easy to share your memories.