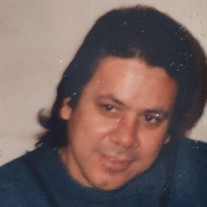 Benito Ramos Longoria passed away with his family at his bedside on March 22nd 2021 after a month-long battle with covid-19 Ben was born November 11th 1953 in Cuero Texas to Petra Ramos and Benito Longoria sr.. he moved to Othello Washington in 1965 at age 12 where he graduated from High School in 1972. Ben married Isabel Martinez in 1973 together they had three children Tina , Ben Jr and Diana Longoria. Ben worked at Carnation for several years as an exterminator but later found he had a passion for carpentry in which he eventually pursued a degree In 1988 while living in Moses Lake Washington he met the love of his life Sandy and they welcomed a daughter in 1990. Ben is remembered as “ the man in black” he had a love for the shade and almost always wore nothing other than black attire. He played on various pool leagues throughout Moses lake and Wenatchee and was a competitive player to say the least . ben was n expert in tae kwondo and was well known for his skill in fighting. He was the life of any party with his one of a kind sense of humor. He could make anyone laugh and loved to tell jokes . He would always be the one who makes that unexpected response to something and have you rolling in laughter Being a father and provider for his family was most important to him . Regardless of what the situation may have been he was only one phone call away when things got hard . Dad was there to save the day no matter what …. Devoted to his part as a father and grandfather His greatest joy in life were his grandchildren. . Being a grandpa and never let anything get in the way of his relationship with his grandbabies . They. Will forever miss the " Papa they were so lucky to have had. Ben had a huge heart and everyday he went out of his way to help someone else , even people he didn’t know he would never hesitate to help in anyway he could. He definitely left a lasting impression on all the lives he touched . He is proceeded in death by his infant daughter Elizabeth Longoria, his mother Petra Ramos Castoreno ,step- father Miguel Castoreno , step daughter Daedra -Kostenko, infant granddaughter Zoey Kostenko and sister Maria Martinez He is survived by his life partner Sandra Rossell his daughter Ashley Vanbouchaute , brother Raymond Castoreno , sister Andrea Reyna , grandchildren Emilee ,Austin, Haylee Vanbouchaute , Addisyn Clark, Kaiser Kostenko & bestfriend Frank Meza

Benito Ramos Longoria passed away with his family at his bedside on March 22nd 2021 after a month-long battle with covid-19 Ben was born November 11th 1953 in Cuero Texas to Petra Ramos and Benito Longoria sr.. he moved to Othello Washington... View Obituary & Service Information

The family of Benito Ramos Longoria created this Life Tributes page to make it easy to share your memories.

Benito Ramos Longoria passed away with his family at his bedside...