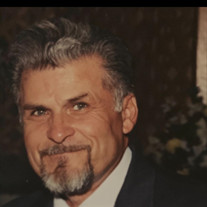 On September 26th, the gates of heaven were opened, and he heard the declaration, “Well done good and faithful servant, enter into the joy of the Lord.” Benigno Garza, also known as Benny, passed away peacefully at his home surrounded by his family to be with his Lord and Savior. He was 69 years of age. Benny was born to Paula Lopez Garza & Porfirio Vela Garza, on February 13th, 1950 in Raymondsville, Texas. He was the third of twelve children. As a child, Benny, along with his family worked the fields as migrant farm workers from Bishop, Texas through various states, making their way to the Yakima Valley area in Washington. The family later moved to Moses Lake, making it their permanent residence. Benny attended Chief Moses Middle School until the 8th grade when he continued helping support his immediate family working full-time. Later, Benny joined the U.S. Army, to serve our country in Augusta, Georgia. In 1978, Benny married the love of his life, Sylvia Garza where they continued to build their life together. Benny took great pride in supporting his family, after some time of working hard and wanting better for himself and his family, he became interested in the electrician field despite no education. He didn’t let that stand in the way he pursued it anyway. You see, Benny was determined, he was a fighter, strong-willed at life. He studied and studied, failed many times at his exams but never quit. Until, one time with little hope, Benny passed. He made it. He worked his way to the top and became a Journeyman Electrician; at one point he even ranked a Foreman electrician. He retired after several years. His life became better indeed…he will continue to provide a wonderful life for Brenda and his wife as he desired. Benny always believed in doing better, trusting God, keeping the faith, working hard and commitment. You see that looking back through his service to our country, serving the church here at Sendero Life Center back when it was known as Sendero De La Cruz as a; Royal Ranger commander, Vice Superintendent and Men’s Treasurer to even, fighting to keep close to his two older children. Benny was a fighter and a man of honor. He loved his family, his children and wife deeply. He was loved by many and some looked up to him as a father figure. He enjoyed get togethers’, visiting friends and family, BBQ’s, especially family reunions…. He always took opportunities to give advice to anyone that needed it. His role at family gatherings was to pray for meals as well as for one another. He enjoyed working around his home when he could, listening to his Christian Norteno Tejano music, playing the Bass in his younger years, camping, Benny took pride in his trucks; Dodge Ram and his ’69 Dodge Adventurer that he earned through hard work. Benny is proceeded in death by his loving parents whom he missed very much, Porfirio & Paula Garza. He is also proceeded in death by older siblings Leonardo & Lino Garza, sisters-in-laws Leonor & Lourdes Garza one granddaughter Aleah and nephews Moses and Andrew. Benny is survived by his wife Sylvia Alvarado Garza, daughters: Veronica Zamora & husband Pete), Sandra DeMuro (Tony), Brenda Garza, Laura Strnad (Justin), Lisa Garza, Valerie Garza and Benny II (Karissa) Benny is survived by siblings: Felipe, Petra, Porfirio Jr (Martha), Canuto (Paula), Juan, Alberto (Maria), Maria, Ricardo (Elissa), Agapito (Leticia). Benny had numerous nieces and nephews that he cherished. As Benny would say, “Don’t give up”, “Keep on going”, “Trust in God”, “Get busy”, “If you’re on time you’re late, if you’re 15 minutes early- you’re on time” lastly “fear and serve God” God bless.

On September 26th, the gates of heaven were opened, and he heard the declaration, &#8220;Well done good and faithful servant, enter into the joy of the Lord.&#8221; Benigno Garza, also known as Benny, passed away peacefully at his home surrounded... View Obituary & Service Information

The family of Benigno Garza created this Life Tributes page to make it easy to share your memories.

On September 26th, the gates of heaven were opened, and he heard...