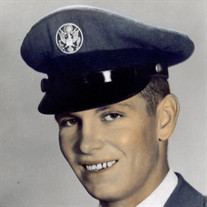 Barry Lee Queen 1/3/1939 - 5/9/2022 The Queen family is sorrowful to announce that on May 9th, Barry Lee Queen passed away in his home in Moses Lake surrounded by his family. Barry was only 83 years young. Barry was born in Emmett, ID in 1939 to Roy N. Queen and Jessie N. Queen. Barry was the oldest of 4 boys that included Marvin, Roger, and Dennis Queen. Barry grew up on a farm in the small, now abandoned, town of Montour, ID. When not going to school or working on the farm, Barry enjoyed the outdoors learning how to hunt and fish from his father. During high school, Barry volunteered to fight forest fires in the surrounding mountains of Idaho. After high school, Barry joined the U.S. Air Force in 1957. After extensive training, Barry was stationed to Yokota Air Base in Japan. After 2 years, Barry had orders to Larson Air Force Base right here in Moses Lake. Not long after, Barry met his wife to be, Nancy and they were married 2 years later in 1961. Barry served a total of 8 years and was honorably discharged in 1965 as a Staff Sergeant. Barry and Nancy gave birth to both of their children, Kelly, and Stacey, in Ogden, UT. After living in a few states back east, Barry and family returned to Moses Lake in 1972. Barry was employed by Garrett Freightlines driving a freight truck in Moses Lake and the surrounding towns. During his deliveries, Barry became well known and loved by many. In 1990, Barry left the freight business to work for Wilbur Ellis in Moses Lake. Barry worked there until he retired in 2004. In 1975, Barry and family in tow moved to his final residence to be on the lake in town. Over the years, the Queen family hosted many friends and family gatherings that created wonderful memories. Everyone was always welcomed in his home, from his children's friends growing up to family reunions and even a wedding for his son and receptions for both children. Barry and Nancy created an Eden-like atmosphere for all that visited. During his retirement, Barry and Nancy became snowbirds and traveled to Yuma, AZ for several years, making many friends along the way. Memories and remarkable stories are still being heard today. Barry was also quite a carpenter, building custom furniture for his home and keepsakes for his children, grandchildren, and great grandchildren. Barry eventually became a master boat builder and created wonderful boats from sailing, rowing to his last and finest boat that he built for his son. Barry was 80 years young when he built this boat and it was completed 2 years later. Many friends and family were involved in the making of this incredibly unique and amazing boat. The boat was used in Puget Sound for fishing and crabbing and is now the family pleasure boat in Moses Lake. Barry became ill with congestive heart failure in March of this year and was eventually diagnosed with multiple types of lymphoma and leukemia that suddenly and unexpectedly took him from us 7 days later. Barry is survived by his wife of 61 years Nancy Queen, son Kelly Queen, daughter Stacey Queen, grandchildren Mickenzie and Matt Campbell,Sydney Queen, McKenna Meise (adopted) and great grandchildren Charlotte and Mars. At his request and humbleness, no funeral or service will be held. Barry will be missed by many.

Barry Lee Queen 1/3/1939 - 5/9/2022 The Queen family is sorrowful to announce that on May 9th, Barry Lee Queen passed away in his home in Moses Lake surrounded by his family. Barry was only 83 years young. Barry was born in Emmett, ID in 1939... View Obituary & Service Information

The family of Barry Lee Queen created this Life Tributes page to make it easy to share your memories.