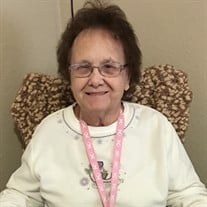 Barbara J Storey, 82, a resident of Moses Lake passed away suddenly on Saturday, December 3rd 2016 at Samaritan Healthcare, surrounded by her loving family. A celebration of her life will be held at 11 am Saturday, December 10th 2016 at Kayser’s Chapel of Memories. Interment will be in Guarding Angels Cemetery. Please sign the online guestbook or leave a note for the family at www.kayserschapel.com Arrangements are in care of Kayser's Chapel & Crematory. Born in Spokane WA , August 27th 1934 to Link and Vi Linden. Married to Richard (Dick) Storey from 1952 until his passing in 1996. They moved to Warden WA where they farmed and started their family. Several years later they moved to Moses Lake. After all five daughters were in school, Barbara decided to work out of the home and became a very smart business woman. She worked as a bookkeeper at several local businesses as well as 20+ years at Peoples/USBank. Barbara lived a very rewarding life doing things that she enjoyed like camping, traveling and trying her best to keep up with the new technology. She especially loved her iPads (yes - plural!) She and Dale were members of the local (Good Sam) Sandy Sams Club for years. Barbara is survived by her loving partner, Dale Hooks, and her constant four-legged companion, Toby, sister, Nancy Knoll, and her five daughters Carole (Dave) Hopkins, Linda Lucas, Sandi (Tim) McDonald, Pam (Roger) Field, and Debbie (Mike) Banks. She also had 9 grandchildren, Bob (Katrina) Horst, Ryan Hopkins, Travis (Sam) Lucas, Kelli (Chris) Gehrke, Kacie Daughtery, Chris (Lucinda) Mac, Pilar Field, Elmer Field, Nicholas Banks, and Corinna (Tristan) Hall, plus numerous great grandchildren. Barbara had a huge caring heart and nothing was more important to her than her family. In lieu of flowers, memorial donations can be sent in her name to Grant County Animal Outreach 6725 Randolph Road, PO Box 489 Moses Lake WA 98837 509 762-9616

Barbara J Storey, 82, a resident of Moses Lake passed away suddenly on Saturday, December 3rd 2016 at Samaritan Healthcare, surrounded by her loving family. A celebration of her life will be held at 11 am Saturday, December 10th 2016 at Kayser&#8217;s... View Obituary & Service Information

The family of Barbara Storey created this Life Tributes page to make it easy to share your memories.