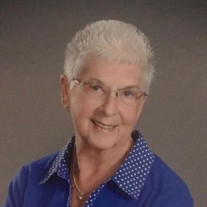 The Hamilton family matriarch Barbara L. Hamilton, surrounded by her family, passed away Friday, February 13, 2020 at the age of 85. Barbara was born November 21, 1934 in Ferndale WA. She was the oldest of five children born to Louis and Colina Bayer. Barbara and James moved to Moses Lake in 1962 with their sons Craig and Michael. James worked for the Moses Lake Fire Department and she worked for the Moses Lake School district as a bus driver for many years. The years of driving the school bus were her fondest memories. She spoke often of all her kids (those who rode on her bus) and how she loved seeing them all grow up during her years driving and after. She also spoke often about her driving her bus to Mission Ridge ski slope in the winter and the fun but scary times driving. After her retirement from the School district she worked in the various restaurants owned by her son, Michael (Mike) where she helped Mike with every part of the daily operations, including hostessing, cooking, managing the staff and so much more. She was admired by all those who passed through the restaurants over the years and she was affectionately called “Grandma” by all. Barbara and James were members of the Moses Lake yacht club where they made many lifelong friends, and enjoyed years of fun and adventure in the San Juan Islands, Lake Roosevelt and Lake Chelan. Barbara was also a member of the Women's auxiliary for the Moses Lake Fire Department where she helped organize activities, supported the community, and where she and James made friendships they enjoyed for the rest of their lives. After Jim's retirement, Barb and Jim wintered in Arizona for several years, meeting lots of new friends and enjoying the winters in the warm weather. Our matriarch, Barbara will be remembered in our hearts forever and by all who knew her for her warm and welcoming smile, her incredible sense of humor, keen sense of adventure, her unwavering support for her family and friends and her ability to look at every situation with an incredibly positive attitude. She made us all stronger, better and happier for loving her and knowing her. She will be eternally missed. Barbara is survived by her siblings Bill Bayer, Ferndale WA, John Bayer, Ferndale WA, Darlene Bayer, Spokane WA and Bob Bayer, Moses Lake WA. her son, Michael W. Hamilton and his wife, Krista Hamilton; grandsons, Jordan M. Hamilton, Derek Hamilton, H. Taylor Hamilton,and great grandchildren, Baylee Hamilton, Harlee Hamilton and Kinlee Hamilton Barbara was preceded in death by her husband James A. Hamilton, her parents and her son Craig Hamilton.

The Hamilton family matriarch Barbara L. Hamilton, surrounded by her family, passed away Friday, February 13, 2020 at the age of 85. Barbara was born November 21, 1934 in Ferndale WA. She was the oldest of five children born to Louis and Colina... View Obituary & Service Information

The family of Barbara L Hamilton created this Life Tributes page to make it easy to share your memories.