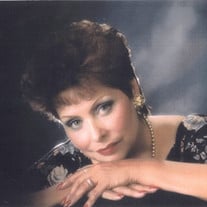 Aurora Moreno Gonzalez – August 19, 1948 – January 6, 2019 Aurora Moreno Gonzalez, formerly of Kennewick, Washington passed peacefully,surrounded by her family, on Sunday, January 6,2019. Aurora lived in Kennewick WA but had been residing in Moses Lake the last six months to be near her family. Aurora was born on August 19, 1948 in Brownfield, Texas. Aurora was born the daughter of migrant farm workers and traveled from Texas to Washington. Eventually the family settled in Moses Lake, Washington in 1964, where she met her husband, Eduardo Gonzalez Sr., they were married 25 years.In 1980 the family moved to Rexburg, Idaho where Aurora worked as the bookkeeper for Porter’s Craft & Frame. She also had an amazing talent of creating floral arrangements and had helped manage a florist shop in Texas. She was a fantastic cook, loved music, dancing, playing cards and but most of all spending time with her children and greatly loved her grandchildren. Aurora is survived by her son Eduardo (Blanca) Gonzalez Jr. – Broken Arrow, OK; daughters Paula (Anita Piña) Gonzalez – Moses Lake, WA ; Priscilla Gonzalez – Corpus Christi TX; Heidi (Lazarro) Marroquin Jr. – Moses Lake WA; brothers Manuel Moreno Jr and Adolfo (Adela) Moreno Sr. – Moses Lake WA; eight grandchildren and 9 great-grandchildren Aurora was preceded in death by her parents, Manuel and Santos Moreno, her beloved son, Jake Gonzalez, brother Adan Moreno Sr. and sisters O’Donna Perez and Anita Jimenez. There will be a viewing for family and friends on Tuesday, January 8, 2019 from 4:00-6:00 p.m. at Kayser’s Chapel of Memories. The funeral service is scheduled for Friday, January 11, 2019 at Our Lady of Fatima Catholic Church, rosary at 9:30 followed by Mass at 10:00. Interment will be at Pioneer Memorial Gardens following the church service. You may sign the guestbook or leave a note for the family at www.kayserschapel.com

The family of Aurora Moreno Gonzalez created this Life Tributes page to make it easy to share your memories.