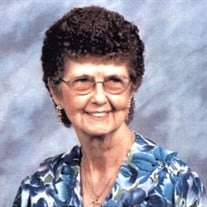 Auda Mae Heaton, 87, Moses Lake resident passed away Friday, June 8, 2018 at LakeRidge Solana Care Center. A graveside service will be held at 11:00 a.m. on Wednesday, June 13, 2018 at Pioneer Memorial Gardens. Auda was born on February 20, 1931 in Diamond, Washington, the daughter of Edwell Joseph and I. Blanche (Hamilton) Berg. She was raised to the age of 13 in Diamond, Washington before the family moved to Colfax, Washington. The family moved to Pullman one year later and Auda graduated from Pullman High School in 1948. She was married to Wayne LeRoy Heaton on October 9, 1948 in Coeur 'd Alene, Idaho. They made their first home on a farm seven miles east of Pullman, where Wayne worked on a farm. In 1952, they moved back to Pullman and later that same year, they moved to Colfax. They remained in Colfax for 10 years before moving to Moses Lake on October 31, 1962. Auda worked as a catalogue sales operator at Sears for over 8 years and remained a homemaker the rest of the time. Her husband, Wayne L. Heaton preceded her in death on November 25, 1990. She has since continued to make her home in Moses Lake and she worked for many years at WalMart. As a long time member of the Immanuel Lutheran Church in Moses Lake, she belonged to the ILCW of Immanuel Lutheran, was President of the Tabitha Circle, was in charge of coordinating wedding receptions for two years, and spent time as a first grade Sunday School teacher. Her hobbies included sewing, plastic canvas needlework, travelling and being around people. She was also a member of the National Society of Daughters of the American Revolution, serving as Chairman of the Constitution Committee for four years and as Chaplain for one year. Auda authored two books of poetry, "Rainbows, Seas and XYZ's" and "Windows of My Soul." Besides her parents, Edwell and Blanche Berg, Auda was preceded in death by her husband, Wayne LeRoy Heaton; daughters, Sandra Archer and Sheila Heaton; sisters Patricia Ellsworth and Leatrice Olfs; and brothers, Chester Berg and Robert Berg. Survivors include her daughters Jennifer (Ronald) Morris and Becky (Don) Mercier; grandchildren, Jessica Starkweather, Donavyn Rhyne, Mitchell Morris, Nicholas Morris, and Courtny Jacobsen; 12 great-grandchildren; and 2 great-great grandchildren. Family would like to thank the staff at LakeRidge Care Center for their loving care of their beloved mother.

The family of Auda Heaton created this Life Tributes page to make it easy to share your memories.