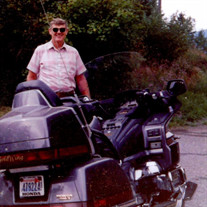 Art Stockman was a born-again Christian, and a member of First Southern Baptist Church. Art was born in Boise, Idaho and attended school there and in Twin Falls until he enlisted in the U. S. Marine Corp at the age of 18. After Boot Camp his company was loaded on board ship and sent to Japan. Three days of seasickness and corpsman A thru R were unloaded. The remainder continued to Okinawa, where he spent the next three years working with large machinery, building bridges and roads. He was discharged in 1957 as Combat Engineer/Construction Inspector with the National Defense Service Medal. Art followed his parents to Moses Lake, WA and started his career in trucking, logging thousands of miles hauling livestock locally and then dairy with Safeway. When he was about 50 years old he drove to California to connect with his biological father and discovered the origin of his name. He retired from the milk plant, dispatching, purchased his own truck and hauled everything from hogs to Humvees for several years. During those years he married, had two sons, divorced, remarried and claimed four grown step-children. Then he and his wife, Dona, adopted three more children, for a total of nine. He and Dona built two houses, acquired 5 acres for the kids and animals and he continued his hobbies of collecting old machinery and car parts to build his Model T. He had a heart attack at age 58 and received his first pace maker. He had a total of three, the last one a Boston Scientific that was programmed to monitor him 24 hours a day. Six years later he was diagnosed with Parkinson’s Disease and a few short months later with prostate cancer. The physical ailments didn’t slow him. The main goal in Arts life was to make people laugh. Chattering on the phone on his motorcycle or telling fabricated war stories. Art was the “go to” guy if anyone needed anything. He adored all of his kids (which interfered with discipline) and all the grandkids as they began arriving. Art was the most kind, generous, affectionate man you could be fortunate enough to know. He was preceded in his death by his mother and stepfather Ruth and Roy Fackler. He is survived by his wife, Dona L. Stockman; brothers, Robert Fackler, Marvin Fackler; sister, Phyllis Kern; children, Douglas Arthur Stockman, Darrel Allen Stockman, Santana Marie Purcell (Bill), Molly Ann Stockman, George Arthur Stockman (Bethanee); four stepchildren, ten grandchildren and four great grandchildren.

Art Stockman was a born-again Christian, and a member of First Southern Baptist Church. Art was born in Boise, Idaho and attended school there and in Twin Falls until he enlisted in the U. S. Marine Corp at the age of 18. After Boot Camp his... View Obituary & Service Information

The family of Art Stockman created this Life Tributes page to make it easy to share your memories.

Art Stockman was a born-again Christian, and a member of First...