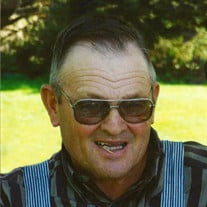 Our beloved Husband, Father, Uncle, Brother, Grandpa, Great-Grandpa, and friend Arnold Herman Springen passed away on November 30th, 2019 at his family homestead in Moses Lake, Washington. He was born in Gillette, Wyoming July 27th 1933 to Herman Henry Springen and May Lorene Sanders. As he grew older they moved around the northwest and finally settled down in Elmer City, Washington where he attended and graduated from Coulee Dam in 1952. During this time he met and courted his sweetheart Zelma Eisler. After their courtship they were married in Elmer City in 1952 and began their journey as newlyweds. Arnold began his apprenticeship in the carpenters union in 1954 and continued his profession until retirement. During this time he spent 65 years as a union member. He also farmed his acreage and established the block 40 building on Stratford Road north of Moses Lake. Zelma and Arnold raised three children on the Farm - Arnold Jr. (Skipper), Michael, and Edward. They were active in the 4-H and the Block 40 community. As the children dispersed Arnold and Zelma worked hard on their property creating an amazing garden that was well known. Roses, tulips, irises, and gladiolas were also beautifully placed in rows down the property that brought such color to their home. Arnold and Zelma even built a pond to stock trout in and have a place for the grand children to enjoy, even to this day. He was an accomplished craftsman and used his knowledge to build just about anything and everything on the farm. He personally built their house, barn, shop, and everything on the property where Zelma still resides. If there was a project or remodel in the area he was called. He used these talents to help his neighbors and good friends. Arnold also loved to fish and hunt. He was always ready for opening day at Blue Lake WA. This tradition has taken place for nearly 60 years. The tradition has expanded upwards to 7 campsites and nearly 70 family members when all can attend. Spending time hunting was also something he enjoyed with his kids, grandkids, and mother. He truly enjoyed the peace and beauty of the outdoors. Without a doubt his biggest love and adoration was his family. He was married to Zelma for over 67 years. His wife, children, grandchildren, and great grandchildren were his most prized possessions and they gave him the desire to be the best he could be as a person and father. He always spoke about “Family First” and truly acted upon this his entire life. He was proceeded in death by his parents Herman Springen and Lorene Gilman, his son Michael Springen, Brother-in Law Henry “Hank” Eisler, and granddaughter Nicole Springen. Arnold we are sorry you are gone, we cannot wait to see that smile and sparkle in your eye. Till we meet again. Arnold Springen’s Memorial Celebration is scheduled for March 28th, 2020 at 2:00 PM - at the Block 40 Community building, Stratford Road 12 NE.

The family of Arnold Herman Springen created this Life Tributes page to make it easy to share your memories.