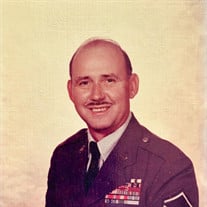 Arnold Clyde Nelson from Moses Lake, Washington, age 97 years young, was called home on August 12, 2020. Arnold was born February 18, 1923, in Long Beach, California to Carl and Emma Nelson. He enlisted in the United States Navy at the age of 18 when the war started, and served on both the U.S.S. Altair and the U.S.S. Spangenberg. Arnold proudly served his country in the Navy from 1941-1958, and then joined the United States Air Force for 15 years where one of his duties was repairing missile sites all over the world. He was a decorated veteran who served during the times of World War II, the Korean War, and the Vietnam War. Arnold retired from Larson Air Force Base in Moses Lake, Washington as a Senior Master Sergeant in 1973, earning him the nickname “Sarge”. He then started his position as Boiler Operator for Big Bend Community College from which he retired in the early 1980's. Arnold was a member of the Elks since 1971. Arnold met his beautiful bride, Rose (White) Nelson in Portland, Oregon while he was on leave from San Diego, California. They married on August 2, 1947, and celebrated 57 years of wedded bliss until her death in 2005. Arnold and Rose made many wonderful friends and memories while he was stationed in Italy, and they traveled extensively throughout Europe. They also lived in Biloxi, Mississippi, before settling in Moses Lake, Washington in 1964. They enjoyed spending time at the ocean, as well as hunting and fishing together. Ten years after his beloved Rose passed away, Arnold found love again and was married to Iris Mills for almost three years, until her death in March of 2018. Arnold spent countless hours fishing and often told tales of the “big one” that got away. He was an avid hunter of geese, ducks, quail, chucker, pheasants, deer, elk, moose, and even shot a bear! For more than 40 years, he looked forward to his signature drink (martini with olives) at Bill Holloway’s house during cocktail hour at 3:30pm....perhaps the secret to his longevity of 97 years! Some of his other hobbies included golf, boat racing in his younger years, raising hunting dogs, as well as playing the accordion. Arnold always had a smile on his face, a joke on his lips, and a wonderful sense of humor. He enjoyed home-cooked meals, seafood, and desserts (especially cookies). Arnold is survived by his sister Marian Hayward, as well as several nieces and nephews. He was a kind and gentle person who loved spending time with family, friends, and honorary grandchildren. Arnold Nelson will be truly missed but never forgotten. A heartfelt thank-you to Bill (who was like a son) and Karen Holloway for the unconditional love they provided. Up until this past month, Arnold remained independent and was fortunate to live at home, with love and support given to him by his sister and neighbors. He will be laid to rest with his loving wife, Rose, at Willamette National Cemetery. In lieu of flowers, please make donations to the Cancer Society or to the charity of your choice in Arnold’s name. Kayser's Chapel & Crematory in Moses Lake, Washington held a viewing for Arnold Nelson on Monday, August 17, 2020. Internment will take place at Willamette National Cemetery in Portland, Oregon, on Tuesday, August 25, 2020.

Arnold Clyde Nelson from Moses Lake, Washington, age 97 years young, was called home on August 12, 2020. Arnold was born February 18, 1923, in Long Beach, California to Carl and Emma Nelson. He enlisted in the United States Navy at the age of... View Obituary & Service Information

The family of Arnold Clyde Nelson created this Life Tributes page to make it easy to share your memories.