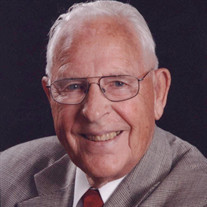 Arlie Maynard Updegrave passed away on May 21, 2018 with family at his side. He was born in Eagle Creek, Oregon on February 9, 1925 to Charles and Viola Updegrave. He grew up near Sandy, Oregon playing in the woods and fishing nearby creeks with 2 brothers and 2 sisters. He met the love of his life, Aurora, at Sandy High School. They married on October 2, 1945 as Arlie was preparing to ship overseas with the Army Air Corps as a radar navigator on B-17s. A quirk of fate and the flu kept him alive and in the states. Arlie was later recalled during the Korean conflict by the United States Air Force to train pilot navigators on B-29s. Arlie and Aurora moved to Pullman where he earned his degree at the State College of Washington (pre-WSU) in Agricultural Engineering in May 1949. After time working for the Bureau of Indian Affairs in Buena WA, in 1952they moved to Moses Lake. In 1957, Arlie started Lad Irrigation, tirelessly building a successful business until 1995, when he fulfilled his goal of selling it to the employees--although he didn’t officially retire until age 83!Very community minded, Arlie was involved in many groups. He was a Rotarian and an active member of the Presbyterian Church to name a couple. He fulfilled many roles in the church from deacon to elder to consultant and even Wednesday night cook. Along with Aurora, he was on the Columbia Basin Community Concert Association board for years. Arlie was a hard worker and a task-master, wanting things done well in every case. He loved to sing with the family in the car and likedtravelling to see family or the world. He was a pheasant hunter, boater, and sometime fisherman in his younger years and a playful grandpa for the grandkids later. After retiring, he’d often be found in the yard weeding with his favorite hoe. He took up golf in his late 60’s and found great joy sharing the game with his friends and family. Mention golf and he was ready to go. Arlie was preceded in death by his wife, Aurora (2013), and is survived by one sister, Rita Hewitt (Robert) of GreshamOR, his son, Ron Updegrave (Kay) of Moses Lake, and three daughters; Susan McMillan (Brad) of Moses Lake, Lisa Olin (Charles) of Union WA, and Jan Wilson (Roland) of Allyn WA. Arlie has nine grandchildren and eleven great-grandchildren. He was loving and well-loved for 93 years. A viewing will be held at Kayser’s Chapel of Memories from noon until 5 pm on Tuesday, May 29th. Arlie’s memorial service will be Saturday, June 2, 2018 at 11:00 am in the sanctuary of Moses Lake Presbyterian Church, 1142 W. Ivy Ave. A graveside ceremony will be held earlier at Guarding Angels Cemetery at 10 am. In lieu of flowers, donations in memory of Arlie can be made to the Building Fund at the Presbyterian Church (https://www.moseslakepres.org/). Sign online guestbook at www.kayserschapel.com Arrangements by Kayser's Chapel.

Arlie Maynard Updegrave passed away on May 21, 2018 with family at his side. He was born in Eagle Creek, Oregon on February 9, 1925 to Charles and Viola Updegrave. He grew up near Sandy, Oregon playing in the woods and fishing nearby creeks... View Obituary & Service Information

The family of Arlie M Updegrave created this Life Tributes page to make it easy to share your memories.