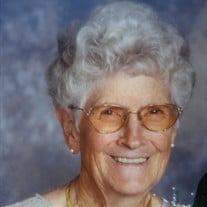 Arlene Merrell Gilbert, 90, of the Royal Slope passed away on Tuesday, November 7, 2017 in Othello, Washington. Arlene was born on July 20, 1927 in Bluebell, Utah. She was the oldest child of Porter Lybbert Merrell and Fern Louise Larsen Merrell. Two brothers, Glade and Reid, and two sisters, Chyrl and Sondra also blessed their family. She grew up in the Uintah Basin and attended school in Duchesne, Utah and graduated from Duchesne High School in 1945 where she served as Student Body President. She met her sweetheart, Jack L. Gilbert, at a county fair and the two were married on November 27, 1945 in the Salt Lake L.D.S.Temple. The couple, after attending Utah State University for a short time, decided to go into farming and returned to their roots in the Uintah Basin in Eastern Utah. There they had 5 children, Lamar, Wendy, Rick, David, and Steven. Their pioneer spirit led them to the Columbia Basin in Washington to break out a new farm from sagebrush on the Royal Slope. Arlene was a devoted mother and wife and a wonderful homemaker. She was thrifty and worked hard along the side of her husband as they carved out a new life in Washington. She loved gardening and was known for her beautiful yards and productive vegetable gardens. She canned fruits and vegetables in season, sewed, baked, and loved music. She played the piano and accompanied many through the years. She served in many positions in her church and community, was a devoted wife, mother, and grandmother. Arlene was preceded in death by her parents and her husband, Jack L.Gilbert. She is survived by her siblings, Glade Merrell (Irene) of Twin Falls, ID, Reid Merrell (Nelva) of American Fork , UT, Chyrl Herzog (Boyd), and Sondra Taylor (Randall), both of Saratoga Springs, UT. She is also survived by her children, Wendy Fielding (Lynn) of Kennewick, WA, Lamar Gilbert (Pam), Richard Gilbert (Joan), David Gilbert (Debbie) all from the Royal Slope, WA, and Steven Gilbert (Sue) of St. George, UT, 25 grandchildren and 75 great-grandchildren. She was dearly loved. Services will be held on November 14, 2017 at the Church of Jesus Christ of Latter-day Saints in Royal Camp at 11:00a.m. with a viewing and visitation at 10:00a.m.Interment will be at the Royal Memorial Gardens. Please sign the online guestbook or leave a note for the family at www.kayserschapel.com Arrangements are in care of Kayser's Chapel & Crematory.

Arlene Merrell Gilbert, 90, of the Royal Slope passed away on Tuesday, November 7, 2017 in Othello, Washington. Arlene was born on July 20, 1927 in Bluebell, Utah. She was the oldest child of Porter Lybbert Merrell and Fern Louise... View Obituary & Service Information

The family of Arlene Gilbert created this Life Tributes page to make it easy to share your memories.

Arlene Merrell Gilbert, 90, of the Royal Slope passed away on...