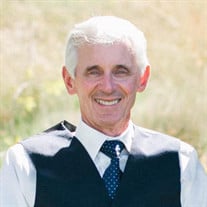 Anthony “Tony” St. Onge passed peacefully on April 9, 2021 due to heart failure. Born in Longview Washington on September 22, 1955 to Francis and Rebecca St. Onge. He was the second child of four children. As a teenager, Tony excelled in every sport he played. It was during his freshman year of high school the passion of swimming ignited. He qualified for the state tournament his senior year, and also graduated first in his class. Upon graduating from high school, he attended Central Washington University where he competed on the swim team. He qualified for the national tournament his freshman year. While at Central he met the love of his life, Jill. In 1977 Tony faced a “game changer” when he became paralyzed as a result of an accident when his truck hit a patch of black ice while teaching in Alaska. Tony’s injury did not pool side him for long. He found an opportunity to use his talent to coach others when he was offered a position coaching the Moses Lake Manta Ray Swim Team and the Moses Lake High School swim team. He was also a teacher of Health and PE. The St. Onge family grew in 1985 with the addition of Tyler and then Joanne in 1988. Tony and Jill raised Tyler and Joanne in Moses Lake, Washington where Tony was able to develop his skills as a teacher and coach over the span of 43 years. Tony positively impacted the lives of those he encountered despite his own challenges. Coach St. Onge formed strong connections with his students and swim team over his 43 year tenure. His impact to the youth in our community was acknowledged when Moses Lake School District unveiled the Tony St. Onge Pool of Dreams. In 2020, Tony was diagnosed with Non-Hodgkin Lymphoma. He battled cancer with the same determination, grit, and fearless never-give-up attitude he taught his athletes. As a devout Christian, Tony trusted God’s plan for him. He exemplified all that we cherish in a husband, dad, teacher and coach. He left this world a better place because of his life well lived. Tony was preceded in death by his mother, father, and mother in law Lorraine Ralston. He is survived by his wife Jill of 43 years, his son Tyler (Tenecia), granddaughter Mila, his daughter Joanne and son in law Jay Neal, his is older sister Teresa Gearry (Bryan), brother Chris St. Onge (Patty), sister Mona Handy (Ron), father in law James Ralston Sr., brother in law James Ralston (Cindy), brother in law Jerry Ralston (Debbie), and many nieces and nephews. A funeral mass will be held at Our Lady of Fatima Catholic Church on April 30th at 10:45am. Guests will be able to enter the church at 10:30am. Slideshow will start at 10:45am. Mass starts at 11:00am. The mass will also be streamed live on Our Lady of Fatima Church Facebook page. In lieu of flowers memorials may be made to the Moses Lake High School Swim Team Boosters, or Our Lady of Fatima building fund.

Anthony &#8220;Tony&#8221; St. Onge passed peacefully on April 9, 2021 due to heart failure. Born in Longview Washington on September 22, 1955 to Francis and Rebecca St. Onge. He was the second child of four children. As a teenager, Tony... View Obituary & Service Information

The family of Anthony "Tony" St. Onge created this Life Tributes page to make it easy to share your memories.