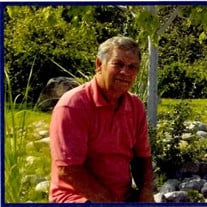 Andrey Gaponenko Obituary October 29, 1952 - April 26, 2022, 69 years Andrey Gaponenko was born on October 29, 1952, the youngest of eight children to Gregory and Proskoviya Gaponenko in Sumskaya Oblast’, Ukraine. His childhood was spent in the quiet countryside doing rambunctious country boy life. This is where he graduated from public school and then moved to complete his military training and technical education in mechanics. Andrey, together with his wife and children, immigrated to the United States in 1998, where he spent many years working as a truck driver and in construction. He was very artistic and seemed to do well in whatever he put his mind to. His early life hobbies revolved around building, drawing/painting, and reading. In most recent years, Andrey spent his time tending to his garden and animals, fishing, playing with his grandchildren, and helping others with home and garden needs. Andrey was a great father to his children and, together with his wife Mariya, spent 25 years caring for his son Fedor who lived with a physical disability until 2018. On April 26, 2022, Andrey passed away in the ICU of Samaritan Hospital in Moses Lake, Washington, following a severe stroke a week before. His wife, daughter, and son-in-law were by his side during the last moments. Andrey is survived by his wife of 41 years, Mariya; his son, Dimitriy, who resides in Ukraine; daughter, Yelena, and her husband Stan together with their three children, Ariana, Aurelius, and Azariah. Andrey has two older sisters and extended family who live in Ukraine. He lived a full life and would have turned 70 years old later this year. He will be greatly missed by everyone who has had the pleasure of knowing him.

The family of Andrey Gaponenko created this Life Tributes page to make it easy to share your memories.