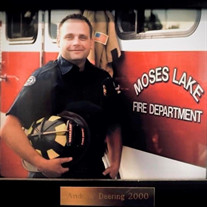 Andrew Lee Deering, 43, passed away at Legacy Emmanuel Hospital in Portland, OR on September 10, 2020 with his family by his side. Andrew was born January 11, 1977 to Andy and Cheryl Deering in Clarkston, WA. During parts of middle school and high school, Andrew lived with the Persingers (Randy, Pauline, Kassie & Ryan). Ryan was a best friend, but the entire family had adopted Andrew as another of their own. Andrew last attended Moses Lake High School, and he graduated in 1995. In 1997, Andrew welcomed his oldest daughter Emma. Two years later, his youngest daughter Lauren was born. Both girls were the apple of his eye, and the reason he worked hard to have a better life. Growing up, Andrew always admired his Grandpa Vic’s commitment to the volunteer fire service to which he served for 30 plus years. To honor his grandfather’s legacy, Andrew joined the Moses Lake Fire Department as a volunteer. After spending over 5 years in a volunteer capacity with the fire department, he was offered a full-time position with the Moses Lake Fire Department. Andrew’s dedication to the fire service and the Moses Lake community spanned over 23 years and was his passion. His dedication to helping others was beyond reproach. Prior to his service with the department, Andrew had worked in multiple capacities in the agricultural community and was still working at Lad Irrigation at the time of his passing. Andrew is known by all for his hard work and dedication. To those who knew him, Andrew was a fiercely loyal friend who gave to others selflessly. His co-workers on MLFD “B-shift” always had some snarky or fun nickname for Andrew, often referring to him as “Baby Loaf,” “White Mocha,” or his most recent “Magic Man.” He was referred to as a calm in the storm while on scene with patients. Everyone around knew he was the guy they could call on when in a time of need. His love of his beloved Seahawks and disdain for all things vinegar will be remembered by all. Andrew was always found goofing around, generally outside playing with the kids. He never lost his fun loving ways, and was always a big kid at heart. On the weekends he could be found traveling, hiking, camping, fishing, or just enjoy taking care of his lawn surrounding by family. Although Andrew was always intensely shy and had what amounted to 5th grade flirting skills, in 2016 he went after and subsequently scored who he aptly referred to as his “dream girl.” On September 8, 2018, he waited at the end of the aisle to marry Tasiya Deering in Deer Park, WA. When joining her in marriage, he also gained another daughter, Teagan. Andrew and Tasiya enjoyed exploring the outdoors together. When long weekends were available, they were always sneaking away to hike, camp, or just travel to new places for an adventure. To all his girls, Andrew was an amazing and dedicated father. Emma played soccer all through her childhood and into college, and Andrew would always be found traveling with her and the family to games. Vacations were spent taking Lauren, Emma, and Teagan to the Oregon Coast. Teagan and Andrew could always be found wrestling or jumping on the trampoline together. Even with a super full schedule working two jobs, Andrew always found time for his girls and was the rock for all. In 2019, Andrew fulfilled the biggest role of his life thus far – he became Papa when Naiyah Lee Patino was welcomed to the world. He cherished his time with her, and all the moments she’d come running through the house screaming PAPA at the top of her lungs. Andrew was preceded in death by his grandparents Victor and Phyllis Deering, and mother Cheryl Deering. He is survived by his wife Tasiya, daughters Emma, Lauren, and Teagan, father Andy, brothers Robert and Danny, sister Vicky (Harris), and granddaughter Naiyah, though there are countless others who loved Andrew like a brother, uncle, or dad. A viewing for Andrew will be held at Kayser’s Chapel of Memories at 831 S Pioneer Way in Moses Lake, WA on Wednesday, September 16, 2020 from 8:30 am to 4:30 pm. Memorial service will be held on Saturday, September 19, 2020 in Moses Lake, WA. Specific location and time TBD.

Andrew Lee Deering, 43, passed away at Legacy Emmanuel Hospital in Portland, OR on September 10, 2020 with his family by his side. Andrew was born January 11, 1977 to Andy and Cheryl Deering in Clarkston, WA. During parts of middle school and... View Obituary & Service Information

The family of Andrew Lee Deering created this Life Tributes page to make it easy to share your memories.