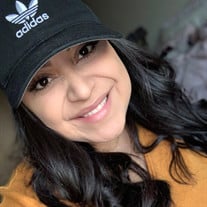 Amanda Lee De La Rosa “Chica Muy Especial” passed away unexpectedly at the age of 32 on January 17, 2020, surrounded by her loved ones. Amanda was born on November 23, 1987, in McAllen, Texas, to Gerardo “Jerry” and Guadalupe “Lupe” De La Rosa. They moved to Washington State in May of 1988. Amanda grew up in Moses Lake and graduated from Moses Lake High School in 2006. Amanda started her work career working for Moses Lake Parks and Rec as a summer job. She then went on to work at Burger King. Her last and final job was at Moses Lake Community Health, beginning in 2011, as a temporary CCR and then became a Dental Receptionist in August of 2011. Amanda was always interested in serving the patient first and that showed in her commitment to the department and the patients she served. She progressed into her Lead role and in 2016 became the Office Manager for Quincy and Ephrata. She was a breath of sunshine with a laugh that was infectious and made you smile, even in the hardest moments. Amanda loved what she did and loved her co-workers. Amanda was baptized in 1987 in the Catholic Church in Texas, and was very faithful and believed in the Lord and knew we are just here temporarily on Earth. Amanda loved traveling to Texas and California to visit family. She loved country music; her favorite artist was Blake Shelton and was given tickets for her birthday by her parents to go see him next month. Unfortunately, she will not be there in person but her family will be in attendance for her. Amanda didn’t have a large group of friends in her daily life, but the few she had, she treasured. Amanda loved her sister, Alexis Lee. Although it seemed as they had some differences, as there usually are within siblings, she would express the love she had for her family. Amanda is survived by her parents, Gerardo and Guadalupe, her younger sister, Alexis (Kirk), grandmother San Juana Dominguez (Jesus), her four-legged daughter, Chloe Mia, and her boyfriend, Josh Doerr, who she met six months ago and made her glow in happiness. She was in the process of making a life with him. She adored Josh and his son, Maddox. Amanda is preceded in death by her grandparents Consuelo and Juan Treviño, her grandfather “Popo” Louis Trimble, her twin brothers Rafael and Isaac, and numerous aunts, uncles, nieces, nephews and cousins. Amanda will be truly missed.

The family of Amanda Lee De La Rosa created this Life Tributes page to make it easy to share your memories.