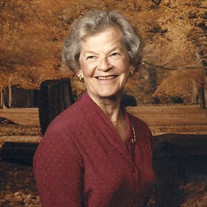 Lennie Alma Jean Chesser Paris, 94, of Moses Lake, Washington, passed away in her sleep at Summer Wood Memory Care Center on August 3, 2016. Alma Jean was born on March 17, 1922 in Paragould, Arkansas, the fourth of nine children. Along with her siblings, her father, Charlie Chesser, and mother, Edna Jane, they worked the 40 acre family farm with no electricity or indoor plumbing. Alma Jean grew up during the Great Depression as her family struggled to make a living. She played basketball in school, was active in 4-H, and regularly attended Brown’s Chapel Baptist Church. She graduated from Greene County High School, securing a scholarship from John Brown Baptist University but she was unable to attend. She worked at a local shirt factory until moving to San Francisco, CA to be nearer her older brother who had joined the Army. Upon returning to Arkansas, she began working as a switchboard operator for the telephone company. She soon met James Bascom Paris, and they were married on May 16, 1946 in Paragould, Arkansas. Shortly afterwards James re-enlisted for military service in the United States Air Force. After 14 years of moving from place to place, James and Alma Jean were transferred from Sculthorpe Air Force Base, England to Larson A.F.B. in Moses Lake in 1960 with their 3 children, Mike, Dale and Mary Jean. Soon afterwards, twin nieces came to live with them: Alma Jean Faulkner Ramsey (of New Hampshire) and Amelia Jane Chesser (deceased) and came to know and love her as Mom. James retired from the Air Force in 1966 after 20 years of service and they chose to remain in Moses Lake where the family purchased a home on the lake. With her outgoing personality, Alma Jean never met a stranger and had her gentle but relentless desire that all should come to know her Lord. She was sincerely interested in others and enjoyed visiting with her family and friends more than anything. She and James attended First Baptist Church for years where Alma Jean was very involved in missions, women’s ministry, Sunday School, Awana, and Good News Clubs. In their later years, James and Alma Jean attended the Christian and Missionary Alliance Church of Moses Lake. Alma Jean was an excellent cook, seamstress and gardener. She loved to host gatherings in her home and was tireless in expressing love to her family and friends. Preceded in death by her parents, 6 siblings, her niece (Amelia Jane Chesser), and her husband (James). Alma Jean is survived by her two sons, James Michael Paris (Helen) and Dale (Patti) Paris of Moses Lake, and Mary Jean Paris Powers of Longmont, Colorado, and her niece, Alma Jean Faulkner Ramsey of Nashua, New Hampshire. Alma Jean’s surviving four grandsons are Brian Paris of Seattle and Tyler Paris of Moses Lake, Jonathan Powers of Longmont, Colorado, and David Powers of Frederick, Colorado, and 5 great-grandchildren, all of Colorado. Please join the Paris family for Alma Jeans' service, Monday, August 8, 2016 at the Moses Lake Alliance Church, 1100 N. Grape Drive, to begin with sharing a meal together at noon followed by her celebration of life at 1:30 with burial after. In lieu of flowers, please consider contributing to the Alzheimer’s research.

Lennie Alma Jean Chesser Paris, 94, of Moses Lake, Washington, passed away in her sleep at Summer Wood Memory Care Center on August 3, 2016. Alma Jean was born on March 17, 1922 in Paragould, Arkansas, the fourth of nine children. Along with... View Obituary & Service Information

The family of Alma Jean Paris created this Life Tributes page to make it easy to share your memories.