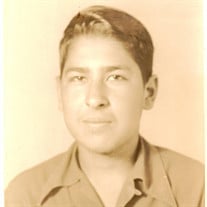 It’s with great sadness that we announce Alfredo “Fred” L. Gonzalez took his last breath and went to heaven on July 2, 2021. Fred was born September 17, 1936 in Eagle Pass, Texas to Alfredo and Agueda Gonzalez and had 14 brothers and sisters. On December 06, 1954, he married his wife, Aurora Z. Gonzales in Fresno, California before coming to Washington and starting a family. Together, they built a life with their children: Fred III, Angie & Gary Walker, Agapito “Pete”, Anna Gonzales, Elsa, and many grandchildren, great grandchildren, and great great grandchildren. Fred was very well known for his food at The Taco Shop. He was owner and loved his work for over 40 years where he enjoyed seeing and talking to everyone who came in to eat before turning The Taco Shop over to Pete, his right-hand man. He loved going for Sunday drives and spending time relaxing whenever he had the chance. He retired in 2017. Fred was preceded in death by his parents, several brothers and sisters, and a daughter, Teressa (stillborn). He is survived by his loving wife of 64 years, Aurora, as well as five children: Freddy, Angie, Pete, Anna, and Elsa.

The family of Alfredo Lopez Gonzalez created this Life Tributes page to make it easy to share your memories.