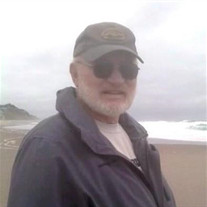 Al Lauckner, 73, a resident of Moses Lake passed away Sunday evening, February 12, 2017 at Deaconess Medical Center in Spokane, his family at his side. A memorial service will be held at 10 a.m., Friday, February 17, 2017 at Kayser's Chapel of Memories. Please sign the online guestbook or leave a note for the family at www.kayserschapel.com Arrangements are in care of Kayser's Chapel & Crematory. Al was born in Fallon, Nevada on May 7, 1943. He lived with his family in Fallon where he and his brother, Larry helped his father do custom combining when he was only 12 years old. Al's father also worked at the Fallon Air Station. He often went with his father and developed a love for flying. In 1955, the Lauckner family moved to Kalispell, Montana where Al attended Flathead High School, graduating in 1961. After graduation, Al joined the Army where he served with the 101st Airborne Unit. After leaving the Army, he moved to Kent, Washington where he met and married his wife of 50 years, Phyllis Chittim. Al and Phyllis had a love for flying and purchased their own plane and lived on a private airport. He continued to instruct and ferry planes in his spare time. People called him when they had a tail dragger plane and needed an experienced pilot. He ferried many older aircraft including an old twin engine Beach from Vermont and a DGA-15 Howard from San Diego. His favorite plane to fly was the Super Cub. The last plane he flew was a P51 Mustang. In 1976 Phyllis and Al were blessed with their son, Kevin Lauckner. Kevin and Al were very much alike. They both had an insatiable thirst for learning. In 1965, Al started his 35 yearlong employment with Rocket Research. During his employment, he worked on the Mars Lander and many other space projects. He moved to Moses Lake in 1979. The name of the company changed several times. (Primex, Olin, General Dynamics) Al was plant manager for many years, but was a safety manager when he retired. Al's true love was his wife Phyllis, son Kevin and grandson, Brenden. He also enjoyed flying and studying the universe. Al is survived by his wife, Phyllis Lauckner; son, Kevin Lauckner; grandson, Brenden Lauckner, all of Moses Lake; brothers, Larry (Elaine) Lauckner, Seattle, Washington and Jim (Rose) Lauckner, Glendive, Montana; sister-in-laws and brother-in-laws, Billie and Gordon Herron, Harrington, Washington, Anna and Steve Hill, Seattle, Washington, Mary and Stan Timperely, Vancouver, Washington; and many nieces and nephews. The family would like to thank all their friends and family for their prayers. They were especially grateful to their son, Kevin for taking care of them this past year. Also a special thank you to the ICU and 7th Floor Cardiac unit at Deaconess Hospital.

Al Lauckner, 73, a resident of Moses Lake passed away Sunday evening, February 12, 2017 at Deaconess Medical Center in Spokane, his family at his side. A memorial service will be held at 10 a.m., Friday, February 17, 2017 at Kayser's Chapel... View Obituary & Service Information

The family of Al Lauckner created this Life Tributes page to make it easy to share your memories.

Al Lauckner, 73, a resident of Moses Lake passed away Sunday...