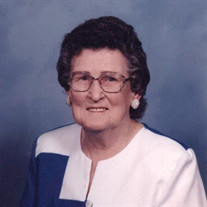 Afton Montague Jeffries, 97, a resident of Moses Lake went home to be with the Lord on February 26, 2017. Viewing will be held from 2:00 p.m. to 5:00 p.m. on Friday, March 3, 2017 at Kayser's Chapel of Memories and from 9:00 a.m. to 9:45 a.m. on Saturday , March 4, 2017 at the Church of Jesus Christ of Latter-day Saints Moses Lake Stake Center. A funeral service will begin at 10:00 a.m. on Saturday, March 4, 2017 at the Stake Center followed by burial at Pioneer Memorial Gardens. Please sign the online guestbook or leave a note for the family at www.kayserschapel.com Arrangements are in care of Kayser's Chapel & Crematory. Afton was the third of 13 children and was born on November 17, 1919 in Woodville, Idaho, daughter of the late James Earl Montague and Annie Rae Hammer. Afton’s family moved quite a bit. They moved to Osgood, Idaho when she was 7 years old and then she lived in Harlem, Montana; Fort Shaw, Montana; back to Woodville, ID; then Osgood, ID again and then on to Vale, Oregon. While living in Vale, Afton met Walter “Walt” B. Jeffries, Sr. They were married October 28, 1940 in Louisville, Kentucky, where they resided for 8 years. They then moved to Ontario, Oregon until 1950 when they moved to Rock Falls, Illinois. They returned to Oregon in the mid 1960’s and then moved to Moses Lake in 1966, where Afton has lived ever since. Afton worked hard all her life. She grew up cooking for her brothers and sisters then moved on to working in a laundry, as a housekeeper /nanny, as a cook, and as a factory worker in a potato chip factory, a cannery, and a veneer mill. While living in Rock Falls, Afton commuted 15 miles daily to Morrison, Illinois to work for General Electric for 10 ½ years. Afton’s latest job was working at Pronto, later known as Carnation. She worked there 10 years and then retired in 1982. Afton was a member of the Church of Jesus Christ of Latter –day Saints and faithfully served in various callings including Primary Teacher, Singles Representative, Visiting Teacher, and Visiting Teacher Supervisor. Afton was known for her beautiful crochet work. Afton could crochet anything! She crocheted afghans, baby blankets, dolls, and doilies - one of which was donated to the Columbia River Temple and used as an altar cloth. Every year, Afton would crochet gorgeous snowflakes that she would enclose in Christmas cards for her family and friends to enjoy. Afton is survived by two sons, Walter (Karen) Jeffries, Jr. and Ken Jeffries; one daughter, Eva Moffit; daughters-in-law, Peggy Hoy and Donna Murphy; son-in-law, Francis Bushman; brothers, Jim Montague and Austin Montague; sister, Emily Mitchell; 13 grandchildren, 26 great grandchildren, and numerous great-great grandchildren. Afton was preceded in death by her husband, Walter Jeffries, Sr., daughter Lois Bushman, sons William Donald Jeffries and George Jeffries.

The family of Afton Jeffries created this Life Tributes page to make it easy to share your memories.